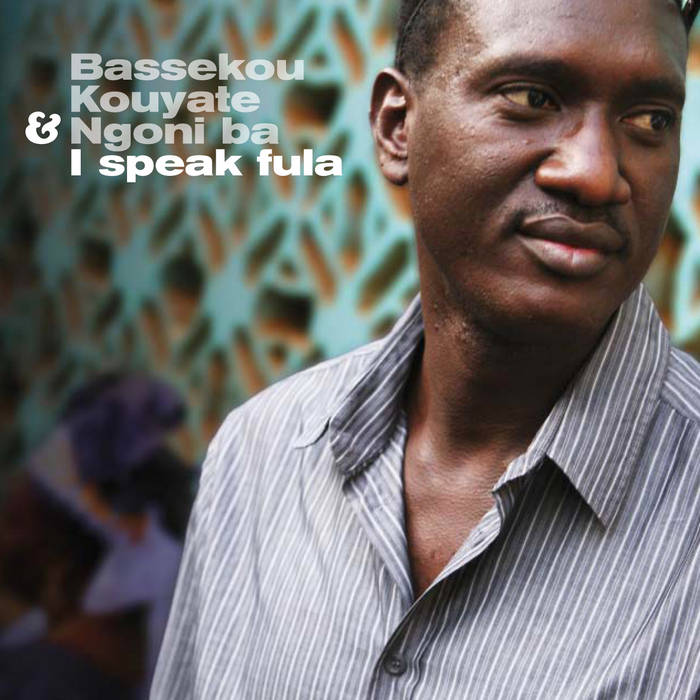 After his award winning album ‚Segu Blue’ the ngoni wizard from Mali is back with a new offering: ‚I speak fula’. The album captures the incredible live energy of Bassekou Kouyate & Ngoni ba and is the next step in the career of one of Malis most exciting and innovative musicians.
The back of this album shows Bassekou Kouyate & Ngoni ba standing on the street with the legendary train station ofBamako behind them. In the 80s a young Bassekou Kouyate played a concert there together with members of the famous Rail Band. During the show Bassekou suddenly stood up and walked up to the front of the stage. For the first time a ngoni player strapped his instrument over his shoulder like an electric guitar and was playing a solo standing up. The audience was stunned. Traditionalists even started a debate after the concert about whether this young man was allowed to change the style of playing ngoni. What was new then has long become common practice in Mali today.

From his early days in Bamako when he was playing in a trio together with Toumani Diabate and Keletigui Diabate till today where he is pursuing his own career, Bassekou has transformed the traditional music of the ngoni into the modern world of today. With his band ngoni ba he has created a new lineup as a quartet with a band’s style of playing. The ngonis they play are still acoustic as in the old days, but Bassekou invented a bass ngoni even lower in pitch than the ngoni ba (low ngoni), and added extra strings to make their instruments harmonically more flexible. In the process Bassekou opened up the magic of an age-old music that he and his band have been playing for their entire lives, to people all over the world. Bassekou Kouyate has now become the ambassador of the ngoni. He has brought this ancient instrument back to where it used to be: to thecenter of Malian music.

Bassekou Kouyate & Ngoni ba are now rocking the stages from Bamako to London. Their sucess has sparked off a new interest for this traditional instrument in Mali. Today not a week passes in Bamako without Bassekou being approached by young musicians who want to start a ngoni band.
The new album entitled ‘I speak fula’ expresses the spirit of openness and tolerance. The music of the griots has always been about building bridges between people. Mali itself is a very multi-ethnic country. ‘I speak fula’ is a playful song about the relationship between the Bamana and the Fula. Bassekou Kouyate is Bamana but it is normal for him to play Fula music. The song is played in a local style called Koreduga. If Malians hear a Koreduga song that means it is time to let their hair down, dance and enjoy. It is a song for everyone and you do not have to speak Fula to join the party.

For Bassekou it has been a long journey that started out in Garana, a small village on the Niger river where he grew up, then took him to the town of Segu, capital of the region, and on to Mali’s capital Bamako. And now it is taking him and his music around the world. Welcome to a new chapter of this exciting story.